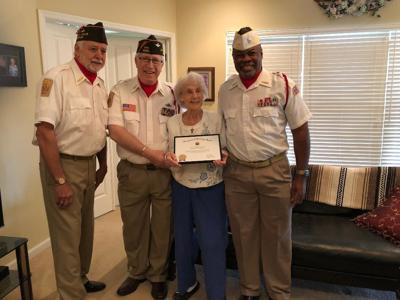 Lake Saint Louis VFW Post 10350 has undergone a name change to recognize one of the most influential local veterans to walk the streets of St. Charles County.

Under its new name, the Ralph Barrale VFW Post 10350 will keep the memory of Ralph Barrale alive, honoring a man who spent a great deal of his life raising up his fellow veterans.

“Ralph was definitely the best-known veteran in all of St. Charles County,” said Jim Frain, a friend of Barrale’s. “He’s done so many things. He lived in Lake Saint Louis since 1974.”

Barrale’s wife, Rose, was always a supporter of her husband’s efforts, Frain said in an email, and the VFW recently presented her with a plaque detailing the name change in her husband’s honor.

Barrale passed away on Oct. 9, 2018. He was involved in a large number of veteran-focused projects, such as the St. Charles County Veterans Museum, which he began working on half a decade ago.

“Unfortunately he didn’t live to see it open, but it wouldn’t be there without his efforts,” Brown said. “He formed the committee and got the building donated by the city of O’Fallon, and I think it goes without saying that it’s very much there because of Ralph’s tireless work.”

“Anybody who is a veteran will know and love Ralph Barrale. Just an absolutely, just an amazing guy.”

Barrale was a World War II army veteran. He served 1st Army, 9th Army and 3rd Army under Lieutenant General George S. Patton, stationed in Europe, and landed on Utah Beach. He was awarded four Bronze Stars for his service.

Brown said Ralph was a “tireless worker for veterans,” and helped found the Lake Saint Louis post, and Brown said the veterans at the post thought it appropriate it be re-named after him.

“We submitted the paperwork to the national organization, and it was approved,” Brown said, adding that there are a few VFW posts in the nation named after “prominent people that have contributed to the history of that post.”

“And we’ve managed to pull it off for Ralph Barrale here at Lake Saint Louis,” Brown said.

Brown encouraged people to visit the Veterans Museum, and to attend the Veterans Day Ceremony at Veterans Memorial Park, held in Lake Saint Louis on Nov. 11 at 11 a.m., which the VFW post members will be participating in.

Frain said Barrale was never out for his own glory, and only ever cared about getting recognition for his fellow veterans.

“I miss him every day, he’s one of those kinds of guys that, if you know Ralph Barrale, you never forget him,” Frain said.