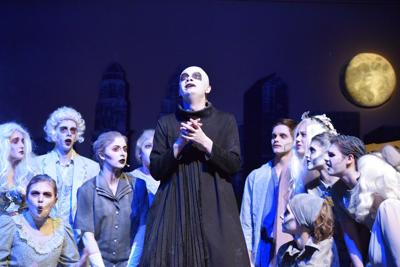 Timberland High School won three awards at the St. Louis High School Musical Theatre Awards (SLHSMTA), held at the Fabulous Fox Theatre on June 2, 2019. With 12 nominations (more than any other participating school) in addition to the three awards, including Outstanding Production, Timberland Thespians and stage crew certainly have had a successful year.

The SLHSMTA are akin to the Tony Awards for high school musicals, and the Timberland Thespians stole the limelight, winning their troupe’s very first awards from the organization after consecutive years of nominations. Timberland won two group awards, Outstanding Production and Outstanding Costume Design for their production of “The Addams Family.” In addition, junior Kyle Rehme won Outstanding Supporting Actor for his portrayal of Uncle Fester in the winning play.

Melissa Queen-Couch, the troupe’s sponsor, said, "I am honored to be recognized by St. Louis theater professionals for our production of ‘The Addams Family.’ With as hard as these students work on these productions, it’s fulfilling to see them earn these types of accolades.”

Presented by the Thomas A. Kooyumjian Foundation this year, the St. Louis High School Musical Theatre Awards exist to celebrate student efforts in high school musical theater. A total of 36 schools participate, having their work evaluated by a panel of experts from the theater profession. Closing the curtains on another season by having an awards ceremony at an historic St. Louis theater like the Fabulous Fox only added to the drama. In fact, students from participating schools took part in a professionally choreographed opening performance on the Fox stage.

The St. Louis High School Musical Theatre Awards are produced by the Fox Performing Arts Charitable Foundation, The Muny, and the Fabulous Fox Theatre, and sponsored by FOX 2 and KPLR 11.